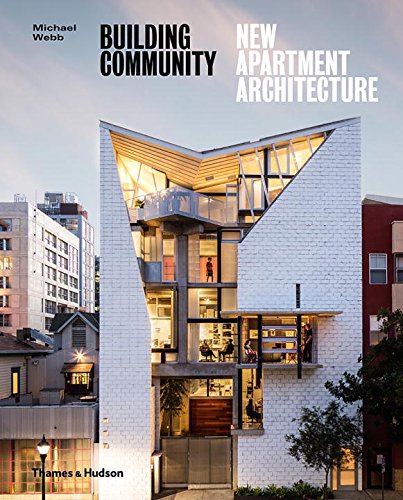 This is the first survey in many years to explore contemporary apartments not as raw canvases for interior decoration but as a building type of growing significance. An introduction presents the history of multiple-occupancy housing through its most innovative 20th-century exemplars, from the urbane blocks of Auguste Perret and Henri Sauvage in Paris, to the landscaped housing estates of Weimar Germany and the visionary schemes of Le Corbusier. The heart of the book features 38 recent and ongoing projects, designed by leading international studios and rising talents. Buildings range from social housing and micro apartments to ‘vertical villages’, megastructures and luxury high-rises. Each project is considered for the way in which it enriches the lives of residents and the city, and is shown through drawings and photographs, taken from the street and within. The book also includes interviews with such contemporary masters of apartment design as Michael Maltzan, Lorcan O’Herlihy, Édouard François and Bjarke Ingels. As our cities grow more crowded, it is critical that we produce large-scale buildings that enhance the lives of their inhabitants, their surroundings and the urban environment as a whole. Building Community offers dozens of proven successes to designers and apartment-dwellers.

Review
'In a world of risk-averse, profit-driven developers, creativity has taken a back seat. But Michael Webb celebrates the shining examples in which design has reached the next level' -- Independent i

'The journey through the book is interesting and fact-heavy, providing new perspective on the walls that surround most people' --Book Witty

'With cities all over the world struggling to keep up with the demand for social and affordable housing, these inspiring buildings…showcase what good design can actually do for communities' --The Culture Trip


Michael Webb is a Los Angeles based writer who has authored more than twenty books on architecture and design, most recently Modernist Paradise: Niemeyer House, Boyd Collection, and Venice, CA: Art + Architecture in a Maverick Community, while contributing essays to many more. He is also a regular contributor to leading journals in the United States and Europe. Growing up in London, he wrote for The Times and Country Life before moving to the US to direct film programs for the American Film Institute and curate a Smithsonian exhibition, Hollywood: Legend and Reality, which traveled to major American cities and Tokyo.